…found appreciation for yoga after sustaining a running injury.  She practiced yoga consistently and was able to be restored both physically and emotionally.  She decided to deepen her appreciation for yoga and it’s benefits by completing a RYT 200 certification in 2014.  Nychole is a E-RYT 200 instructor and is a registered member of the Yoga Alliance.  Nychole’s classes are breath and alignment based, and designed to help fellow students explore their potential by guiding them through powerful, playful, and mindful asanas. 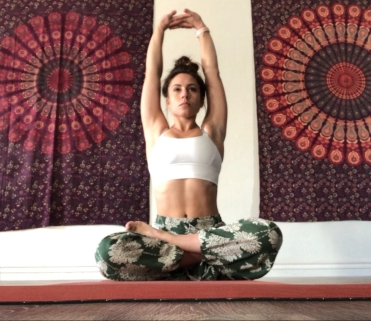 Leah found Yoga in 2011 when a friend of hers, a Yoga teacher, nudged her into attending her class. It wasn’t love at first sight, but Leah believes in trying something three times before writing it off. With consistency and encouragement from her friend, Leah developed a practice that began to feel like home to her. Leah became an RYT-200 in 2018 after completing her teacher training through Yoga District in Washington, DC. As a teacher, Leah hopes to hold a space for those seeking reprieve from the demands of daily life; you can expect her classes to be very breath-focused, prop-friendly, and self-centric. She is thrilled to be joining the 520 community! In her spare time, Leah loves to run, weight train, and spend time exploring Tucson with her deaf pit bull, Peanut.

David finally went to a yoga class, after being invited by friends. Looking for a way to rehabilitate a knee injury, and for something challenging, he went to a Hot Vinyasa class. The physical and mental workouts pushed his limits, but the mindfulness of the practice is what kept him coming back. After years of practice, David wanted to broaden his knowledge of yoga. David received his 200-hr training under Dave Hernandez, RYT-500 at studio 520. He looks forward to helping others find the benefits in the practice, as well as the possibilities of the self. David now teaches many forms of yoga and meditation with emphasis on mindfulness, gratitude, change, and heart.

Chelsea found yoga 5 years ago and immediately fell in love! Last year she finally took the leap, leaving her corporate job to pursue her RYT 200 certification. She believes yoga comes in many forms and loves experimenting with all types. It is her belief that yoga can heal almost all wounds and she enjoys sharing her journey online through social media in order to encourage others to challenge themselves and find their inner strengths.

Brandy found yoga by accident. 10 years ago, she joined a friend for class and fell in love with the practice! A light came on that just continued to grow brighter every time she came to the mat. What began as solely a physical practice has blossomed into a deeper awareness of mind and spirit. She is an E-RYT 500 teacher inspired by ashtanga, power, and vinyasa teachings.

Student first, teacher second: expect to be challenged mentally and physically in Brandy’s classes. She believes strongly in the power of “possibility;” we don’t know until we try! “Only by passing through resistance do we become stronger,” a quote by Sri Swami Satchidananda that she often shares and teaches from. Her classes offer a strong breath connection with powerful flows to tap into our internal strength!

Shelle first discovered yoga when she was eight years old; she didn’t get serious about her practice until a colleague took her to a Bikram class in Tucson. That class sparked a passion for yoga that took Shelle to Atlanta, Chicago, Montreal, Hong Kong and Istanbul.

Shelle has always been very athletic and her favorite classes to teach and practice are Vinyasa style flows. She is a E-RYT 500, and has been teaching for 18-years and has trained with Bikram, Paul Grilley (Yin), Dave Swenson (Ashtanga), Anna Forrest (Forrest Yoga) and Shiva Rea (Prana Vinyasa). The biggest influence on her teaching is Patrick Creelman in Hong Kong. Shelle’s teaching combines aspects of all of her teachers with a focus on strength and alignment. 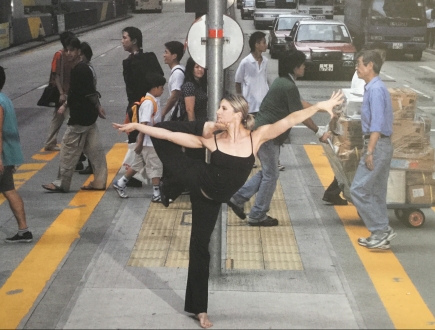 A native Tucsonan, Ysa Rodriquez received her RYT-200 from Studio 520 in 2017 and is a registered Yoga Alliance member. She enjoys helping students find a mind-body connection and confidence in their practice. She believes movement is a celebration of what the body can do and if you have a body, you can do yoga! If she’s not in the gym or in a yoga class, you can find her hanging out with her two dogs.

Jackie began practicing yoga in 2002 at various gym settings. By 2006, she had fallen in love with the practice, knowing there was something deeper resonating each time she came to the mat.  In 2008, after taking a Level 1 YogaFit training, she knew she wanted more.  Soon after, she found Ann Richardson and signed up for the 200hour training at Studio Bamboo Institute of Yoga.  She graduated in March of 2010.

It was during her training with Ann Richardson, that Jackie found Lisa Rapp, a certified Jivamukti instructor.  She was immediately intrigued by Lisa’s unique teaching style, which encompassed spirituality, devotion, chanting, and sacred teachings.  She received training from Lisa at My Yoga Spirit and graduated with 500 hours in May of 2012. At that time, she was given the Sanskrit name “Ananda”, which means bliss.

Jackie is also a massage therapist from the Cayce/Reilly School of Massotherapy. She brings her knowledge of anatomy and holistic health to her classes and enjoys deepening her students’ practice with nurturing hands-on adjustments. Savasana, the final resting pose in every yoga practice, is heavenly in Jackie’s classes, with the added touch of massage.

Jackie was born and raised in Virginia Beach, VA.  She recently moved here to Tucson, AZ with her husband Walter and their two children, Gavin and Kiera.  Jackie enjoys gardening, riding her bike, hiking, running, listening to live music and exploring Tucson with her family.

Gretchen Abbott has been practicing meditation and yoga for over 15 years. She graduated with her 200hr TT from Yogaville where she was trained in Integral Yoga and lived on an Ashram. Integral Yoga is a complete practice of yoga with pranayama, meditation, chanting, asanas, and yoga nidra (or deep relaxation). Although, Gretchen enjoys teaching this class, she is also well versed in Yin yoga, chair yoga, Vinyasa,Hot yoga, Partner yoga and yoga for children.

Gretchen’s approach to yoga is fun, easeful, and creative. She advocates and encourages “mindful movement” a practice that she continues in her own day as well as with all her classes and workshops. Listening to the body and practicing the mantra “no strain, no stress”
Gretchen’s classes are filled with variations for all levels. She incorporates light hearted humour, and encourages the awareness of the self, the breath, and the body. Integrating mind, body, and spirit in a practice to tone and strengthen the body in a subtle but powerful way! 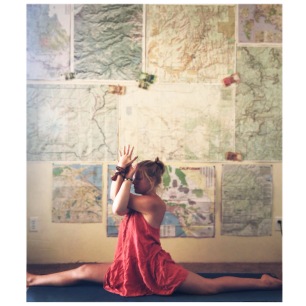 Born and currently located in Tucson, AZ, I was raised in New Jersey in a traditional Hindu household. During my childhood, I was introduced to the spiritual concepts of yoga by my parents who regularly read Hindu scriptures and integrated the practices of the eight limbs of yoga into their lifestyles. At the age of thirteen, I sustained a chronic injury. In an effort to strengthen and restore mobility, I began a daily yoga practice. With time and commitment, my spirit, soul, and body gained strength and mobility returned.

In 2015, I received my RYT 200 in traditional Hatha and Vinyasa style flow. I believe that every form of yoga presents its own benefits to students depending upon their varied needs. I have since obtained certifications to teach Childrens, Yin, and Yoga Nidra and have gained thorough experience teaching a wide variety of styles with diverse populations and bodies. I strive to bring an equal balance of awareness and tranquility to my students and classes. My classes aim to infuse alignment based, intuitive, and joyful movement with reverence for our bodies and the eight limbs.

Alison was first introduced to yoga here in Tucson. After experiencing a sports related neck injury, her physical therapist encouraged her to attend a yoga workshop that he was hosting with his wife. That experience prompted a lifelong journey to explore the mind-body connection. Her passion for the practice led her to complete a 200-hour RYT certification in the Spring of 2008. Since that time, Alison has taught students of varying levels and taken classes in studios throughout Europe (all in different languages!). Most recently, she taught yoga to service members and their families stationed in Naples, Italy. Her style is flow based, linking breath to movement, often with a theme or intention intertwined.

Like so many yogis, Stephanie came to her practice with the intention of building strength, improving balance and increasing flexibility.  Very quickly she discovered that yoga was a powerful practice of transformation of the heart and spirit.  “All those heart openers started to really do something and I began to feel more love for myself and more love for the world around me.”  Being an introvert by nature, Stephanie didn’t imagine herself a teacher but her love of yoga created a desire to share its magic with others.  She received her 200 Hr certification with Danielle Mika Nagel at lululemon’s teacher training mind.ful.on in Pacific Grove, California.

Stephanie loves dogs, including but not limited to her own, Alfie, Gigi and Sheba.  Stephanie has two long term goals 1. To run her own yoga studio in Buenos Aires, Argentina 2. To start a non-profit that provides yoga to aid cancer patients and their families, people dealing with grief and individuals with depression and anxiety.

I’ve been practicing yoga sine 2010 and enjoy many different styles. I am currently a 200 hour RYT and have also trained in Acro Yoga and slackline as well. I believe yoga is one of the most effective and powerful practices for a healthy and well balanced lifestyle. I’m honored to be guiding others through this special practice. 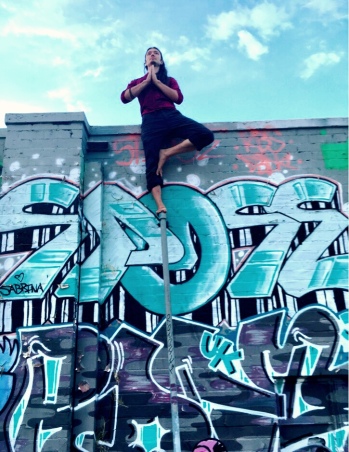